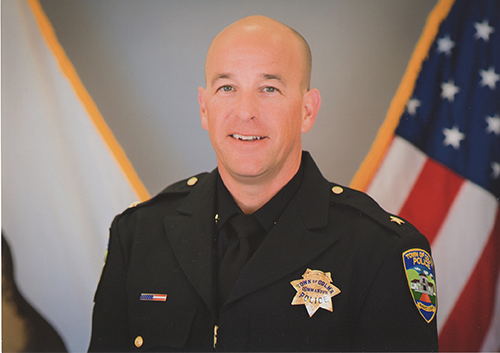 Police Chief Kirk Stratton announced his retirement from the Colma Police Department, calling an end to his 27-year career in law enforcement serving the Colma Community.  His last day will be Friday, June 26, 2020.

Chief Stratton joined the Colma Police Department in 1993 as a Reserve Police Officer. He has progressed up through the ranks, serving as Sergeant, Commander, Acting Chief of Police, and then Chief of Police. Along the way, he served in a variety of leadership roles, including Field Training Officer, Officer in Charge, Training Manager, Detective Sergeant, Field Training Sergeant, and San Mateo County Gang Task Force Supervisor. Chief Stratton received several DUI awards and officer commendations. His influence reaches beyond Colma, as he has served as president of the San Mateo County Training Managers Association for two terms; as a Physical Training Instructor and Tactical Officer at the Police Academy; and as an Inner Perspectives Facilitator, Coordinator, and Director.

Chief Stratton received a Bachelor of Science degree in criminal justice from Sacramento State University and received graduate training at the Supervisory Leadership Institute and the FBI National Academy. He was a member of the International Association of Chiefs of Police and the Law Enforcement Executive Leadership Development Association.

Upon giving his notice, Chief Stratton said, “It has been twenty-seven years since I was a young twenty-five-year-old pursuing a job in law enforcement, and the Town of Colma and Chief of Police at the time, Chief Art Dollosso, provided me that opportunity. For this, I will always be grateful. I have enjoyed serving the Town of Colma and the community during my career, and as Chief of Police for the past six years. I am proud of the many accomplishments and the work our staff has performed to keep the community safe.”

“Chief Stratton epitomizes professionalism and integrity, and through his leadership, is leaving the Colma Police Department in a great position to start a new chapter,” said City Manager, Brian Dossey. “I truly enjoyed working with Chief Stratton. He was committed to protecting the Residential and Business community as well as the men and women that served in the Colma Police Department. I wish him well in his future endeavors.”

Kirk heads into retirement with ambitions to continue teaching. He also looks forward to spending more time with his wife Noreen, his son Skyler and his daughter Cierra, who are currently attending college.

City Manager, Brian Dossey will be working with Chief Stratton to ensure a smooth and timely transition. The City Manager will determine when and how to fill the vacancy created by Chief Stratton’s retirement.