On 03/05/2020 at approximately 02:45 am, a Colma Police Officer attempted to conduct a traffic stop on a Ford F350 pick-up truck and trailer for various traffic violations. The Ford failed to yield, and a pursuit was initiated northbound on 280 from Serramonte Boulevard. Due to the suspect’s erratic driving, and for the safety of the public, the pursuit was terminated and California Highway Patrol (CHP) were notified. CHP located the vehicle in San Francisco and another pursuit ensued. The sole occupant of the Ford, Jose Romero, a 31-year old Richmond resident, was ultimately taken into custody in Oakland.

Colma Police Officers responded to the scene and confirmed the driver of the Ford was the same driver during their pursuit. The Ford was reported stolen out of San Rafael and the trailer was stolen just hours prior in Novato.

Romero was arrested for outstanding warrants and charges related to felony evading, vehicle theft, assault with a deadly weapon, and drug possession.

Romero was on active probation and a search of his hotel room was conducted. During the search, officers contacted Horacio Bettencourt, a 30-year old resident of Richmond, inside of the hotel room. During a search of the room, officers found Bettencourt to be in possession of methamphetamine, evidence of narcotics sales, and a large amount of cash. Officers also located three additional vehicles registered to both Bettencourt and Romero in the parking lot. The vehicles contained approximately $100,000.00 in suspected stolen property.

Bettencourt was arrested for an outstanding warrant and narcotics related charges.

Both Romero and Bettencourt were booked into the San Mateo County Jail on numerous felony charges.

Officers have been reuniting stolen property with their owners, located from Marin County, Contra Costa County, San Mateo County, San Francisco County and Alameda County. Attached are photos of the recovered property. If you believe it belongs to you, please contact the Colma Police Department at (650) 997-8321.

Romero and Bettencourt were determined to be involved in numerous crimes throughout the Bay Area, including auto burglary, catalytic converter theft, vehicle theft, and trailer theft. Anyone with information about these individuals, or the stolen property, is encouraged to contact the Colma Police Department Detective Bureau at 650-997-8321. If you wish to remain anonymous, you may call the anonymous tip-line at (650) 997-8337. 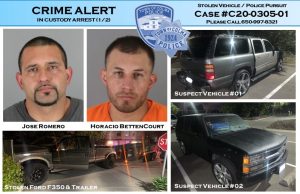 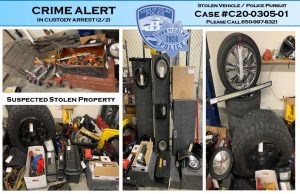