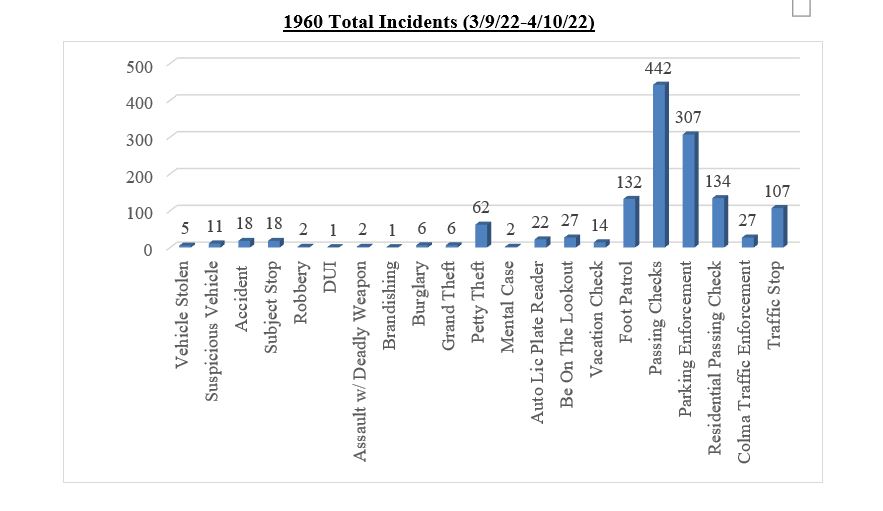 March 2022 was the highest case volume the department has taken in a one-month period. The majority of the cases continue to be theft related.

March 14, a vehicle was stolen from a parking lot and later determined to be used in multiple violent crimes in San Francisco. Detectives from both agencies are working together to identify and hold these criminals accountable for all cases.

March 15, officers received an alert that a stolen vehicle was entering our jurisdiction. They responded and located the vehicle, detaining the occupants. The driver had an outstanding felony warrant and was arrested and booked into jail for possession of the stolen vehicle and his outstanding warrant.

March 16, a victim reported being threatened with a pocketknife by an unruly customer. Officers responded and located the suspect, who was arrested and booked into jail.

March 16, officers received an alert that a stolen vehicle was entering our jurisdiction. Officers responded to the area and located the vehicle. A traffic stop was conducted, and the driver was arrested and booked into jail for possession of the stolen vehicle.

March 17, officers responded to the report of a deceased male resident. The coroner responded, and we are awaiting results of their investigation. During that investigation, officers were notified that another resident was in possession of a pipe bomb that he reportedly found. Officer contacted the resident and confirmed his possession. The building was evacuated, and the bomb squad responded and safely secured the device. Anyone with any information on either case is encouraged to call the Colma Police Detectives at 650-997-8321, or our anonymous tip line at 650-997-8337.

March 19, officers responded to an in-progress assault and kidnapping where a male struck and forced a female into a vehicle then fled. Officers began interviewing witnesses and, utilizing our local license plate reading technology, were able to locate a match on the suspect vehicle and a direction and time frame it was last seen. Officers responded to the registered owner’s address and located the male suspect inside of the vehicle. Officers determined that this was a domestic violence incident and arrested and booked the male for multiple felony assault and false imprisonment charges. He posted bail and is awaiting trial.

March 22, officers responded to a report of a female theft suspect who threatened the loss prevention agent with a stun gun. Upon arrival, officers located a female matching the description of the suspect. Through the investigation, officers learned that the 22-year-old suspect stole multiple items with three juvenile family members in her care. Officers located the stolen items in her bags and stroller. The juveniles were released to another family member and the suspect was booked into jail on felony robbery and grand theft charges. She posted bail and is awaiting trial.

March 26, officers responded to the report of an armed robbery. Officers located the victim, who stated two adult males attempted to steal his gold chain and pointed a firearm with an extended magazine at him. Following a brief struggle, the suspects fled in a vehicle without the necklace and were not apprehended. Investigation into this incident is ongoing. Anyone with any additional information is encouraged to call the Colma Police Detectives at 650-997-8321, or our anonymous tip line at 650-997-8337.

March 28, responded to a felony grand theft and commercial burglary that had occurred earlier that day with no suspect on scene. Officers responded and identified the suspect, a known retail theft suspect who was released from jail on bail just a few days prior. On March 29, the suspect was arrested and booked into jail by another local agency for being a felon in possession of a loaded firearm. Colma officers responded to jail and added the additional felony charges for our investigation, including the enhancement for committing a felony while out on bail. He has since been released from jail and is pending trial.

March 29, officers responded to the report of a suspect who stole a machete and was threatening to kill a citizen. Officers located the suspect, and he was arrested and transported to a local hospital for unrelated treatment for previous and unrelated injuries.

April 1, officers located a vehicle in a parking lot that was related to a grand theft investigation outside of Colma. Officers contacted the occupants and determined a subject was in possession of a significant amount of narcotics and burglary tools. The suspect was booked into jail on possession of narcotics for sales and later posted $25,000 bail.

April 5, officers received an alert that a stolen vehicle entered our jurisdiction. Officers located the vehicle and were able to identify two subjects who had exited the car and entered a nearby business. Officers located and detained the two suspects and arrested them for possession of a stolen vehicle, possession of narcotics, providing false identification to the police, and multiple outstanding arrest warrants. The male is in custody awaiting trail and the female was released to another jurisdiction on her warrant.

April 6, officers received an alert that a stolen vehicle entered our jurisdiction. Officers located the vehicle and detained the occupants. That driver was booked into jail. Later that day, officers received another alert of a stolen vehicle in our jurisdiction. Officers located the vehicle and attempted to stop it. The suspect rammed the vehicle into the occupied patrol vehicle multiple times and was able to flee. Officers pursued the vehicle, but lost sight. The vehicle was located unoccupied on the freeway after a collision into another vehicle. The suspect had fled the scene on foot, leaving the stolen vehicle behind. With the assistance of multiple allied agencies, an area search was conducted but the suspect was not located. Fortunately, nobody was injured during this incident. The investigation into this case is ongoing. Anyone with information is encouraged to call the Colma Police Detectives at 650-997-8321, or our anonymous tip line at 650-997-8337.