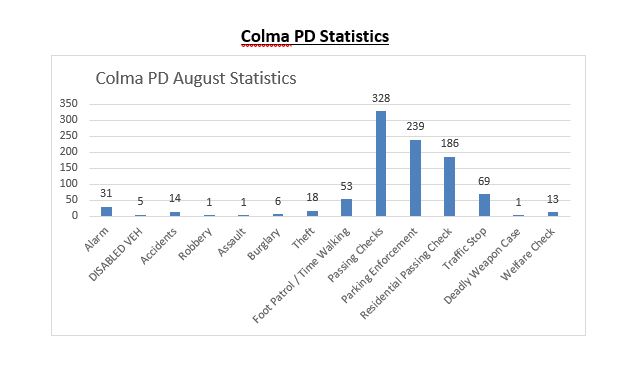 The month of August for the Town of Colma Police Department started off with a vehicle collision in the parking lot in the 900 block of Serramonte Boulevard.  The vehicle pushed a parked car off the parking lot wall and into the back wall of an adjoining business.  Fortunately for everyone involved, there were only minor injuries.

On 8/4/21, two vehicles parked in Sterling Park Neighborhood were vandalized via broken windows.  It was determined that one vehicle was burglarized, and nothing was taken from the other.  Both cases are under investigation.  Any resident with any information is encouraged to contact the Colma Police Department’s Investigations Division, or you can remain anonymous and call our Tip Line at (650) 997-8337.

On 8/7/21, a victim reported that his storage locker was broken into and was adamant that he found one of his stolen items being sold on the internet.  Officers reached out to the seller and set up a meet with the potential suspect.  It was ultimately determined that the person selling the item was not selling the victim’s stolen property. If your items are stolen and you believe you located a match being sold online, it is best to contact law enforcement and have them coordinate this type of meeting.

On 8/10/21, an unknown person was believed to have started a fire off the side of the road near Junipero Serra Boulevard and Southgate Drive.  Fortunately, the Colma Fire Department was able to get the fire under control before it did any significant damage.  With the help of the Broadmoor Police Department, a suspicious person was stopped and interviewed within a mile of the crime scene.  The following morning, Detectives reviewed the case and remembered that they had firsthand knowledge of the suspect stopped by the Broadmoor Police Department.  Through their diligent investigation Detectives were able to identify the suspect and send the report to the SMCO District Attorney’s Office for Arson charges against the suspect.

On August 15th a couple attempted to purchase a vehicle fraudulently from one of our auto dealerships.  Through their investigation Officers were able to identify the two suspects and request charges by the SMCO District Attorney’s Office.

On August 21st Detectives responded to one of our auto dealerships on the report of a subject attempting to purchase a vehicle fraudulently.  Detectives and Officers arrested the suspect and located a backpack full of approximately 200 victims’ personal information.  It was determined that the car the suspect drove to the dealership in was also purchased fraudulently at another auto dealership in San Bruno, CA.

On August 24th while searching social media Detectives located a video of two cars racing down Serramonte Blvd which resulted in a third-party innocent person being struck by one of the racing vehicles.  Investigation led to the identification of both drivers and charges will be requested for reckless driving and being engaged in a speed contest.  The information was also provided to the innocent third party to assist with her insurance claim.

Officer Melendrez participated in a county STEP Detail for increased traffic enforcement throughout the county.