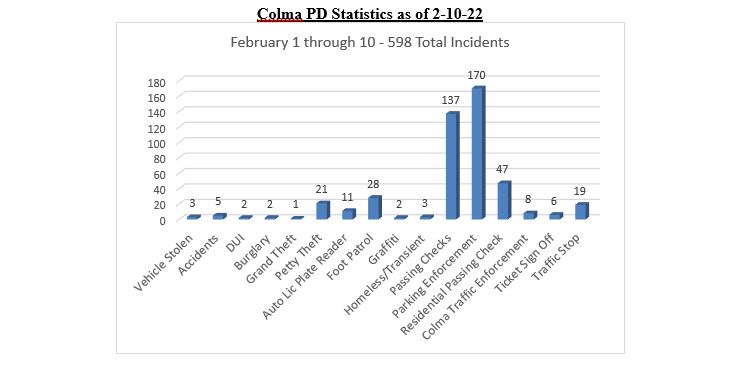 All statistics reported are from 2/1/22 through 2/10/22.  This report was completed early due to the short month and staffing schedules.  We have taken 44 reports and 9 arrests.  We have issued 42 citations and conducted 19 traffic stops.  The final statistics for the month of January were 129 reports and 56 arrests.  In January we issued 241 citations and conducted 74 traffic stops.

In these first ten days of February, our dealerships have had a few vehicles stolen via fraud.  In one case the unknown suspect entered the dealership and was able to take possession of a vehicle for an overnight test drive.  When he didn’t bring the vehicle back the dealership realized that he used fraudulent information to complete the test drive paperwork.  In another incident the suspect completed an online application and qualified for the purchase of a vehicle.  The dealership delivered the vehicle to the suspect outside of our jurisdiction.  It wasn’t until the bank rejected the loan that the dealership realized that the information provided was fraudulent.  Both cases are currently being investigation and the vehicles have been entered into a country wide stolen vehicle database.

On 2-2-22, Officers responded to a retail store on the report of a subject stealing.  Officers were able to detain the subject and determined that he had stolen over $1,700 worth of merchandise.  Officers also located other people’s driver licenses and credit cards on the subject following a search of his person.  The subject was issued a citation and the property was returned to the retail store.

Also, on 2-4-22, Officers located a transient subject in possession of our Town of Colma, Town Hall’s, American Flag.  Through their investigation officer determined that the subject had stolen it off of our flagpole.  The subject was issued a citation for theft and the flag was returned.

On 2-6-22, Officer responded to a retail store on the report of an in-progress theft.  Upon their arrival, officers located the suspect fleeing on Serramonte Blvd.  Officer attempted to conduct a traffic stop but the driver fled from officers onto northbound Hwy 280.  Officers discontinued the pursuit of the suspect due to the risk that it posed to the community.  This investigation is ongoing and is related to organized retail crime (ORC).

On 2-7-22, there was another theft from a retail store.  The subject stole $2700 dollars’ worth of merchandise and fled in a vehicle.  The employees of the store were able to get a license plate for the vehicle and provided an excellent description of the suspect.  Through their investigation officers were able to create a photo lineup with the potential subject responsible.  Witnesses were able to identify him as the person who stole, and the case will be sent to the SMCO District Attorney’s Office for the issuance of a warrant.

On 2-7-22, Officers on routine patrol observed a suspicious person walking through one of our auto dealerships.  The officers were able to contact this individual and determined that he had just committed a retail theft from a nearby business.  Officers issued him a citation for possession of stolen property.  Because of our officers proactive policing we were able to return $300 dollars’ worth of stolen merchandise back to one of our local businesses.

On 2-9-22, Officers on routine patrol conducted a traffic stop on a vehicle for running a stop sign.  Through their investigation it was determined that the driver was operating his vehicle under the influence of alcohol.  The driver was issued a citation and released to a sobering facility.

Of the 44 cases, we have taken these last 10 days, 22 of them have been related to retail crime.

Maybelle, thank you so much for stopping by last weekend with lunch for our patrol officers and dispatch. Your kind gesture is always and very much appreciated! 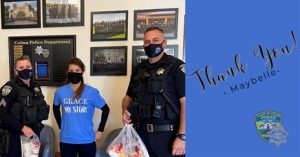