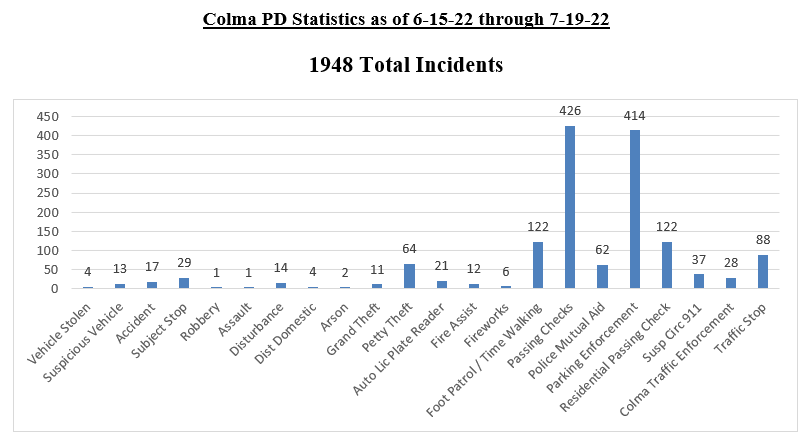 In June of 2022, we took 182 reports, the highest number of cases in a one-month period ever.  In June we arrested 74 people for 59 Misdemeanors and 15 Felonies. We issued 245 criminal and traffic citations and conducted 93 traffic enforcement stops. Between July 1 through July 19, we have already taken 77 reports, made 29 arrests, issued 122 citations, and conducted 47 traffic stops.

On June 15th Officers were dispatched to a local retail store on the report of a theft.  Upon stopping the fleeing vehicle one of the occupants decided to run from the officers.  Following a short foot pursuit, officers were able to detain all three suspects.  Through their investigation officers were able to identify one of the occupants of the vehicle to be responsible for three separate thefts from the business.  The other occupants of the vehicle were arrested for narcotic possession, resisting arrest, and various warrants for their arrest for similar violations.

Later that night, officers received a license plate reader alert that another stolen vehicle had entered the Town.  Officers located the vehicle in the parking lot of one of our businesses.  Upon contact with the driver, it was determined that he was a wanted parolee at large.  He was arrested for his outstanding warrant and for a new charge of being in possession of a stolen vehicle.

On June 28th officers conducted a traffic stop and determined that the driver of the vehicle was on probation for a firearm possession.  Upon searching the driver’s vehicle and residence, officers located ammunition in his possession.  The driver was booked into jail for violating his probation and for being a felon in possession of ammunition.

On June 29th officers located a suspicious vehicle driving around the sterling park neighborhood at 4:30 am.  Upon contact with the driver, it was determined that he was on probation for narcotic violations.  After searching the driver and his vehicle a large quantity of stolen mail was located.  Further follow-up determined that the driver was a prolific mail thief who was in possession of 39 different victim’s mail from multiple apartment complexes.  The driver was booked into jail for possession of stolen mail.  It was later determined that the driver did in fact break into multiple mailboxes at apartment building in Mountain View, CA before coming to the Town of Colma.

On July 2nd officers received a license plate reader alert on a stolen vehicle that had just entered the Town.  Upon contact with the driver, it was determined that he was not only in possession of this stolen car but also had two outstanding warrants for his arrest.  Officers booked him into jail on his new charges along with his outstanding warrants.

On July 5th officers conducted a pedestrian stop on a male subject riding his bicycle through one of our shopping centers.  It was determined that he was a known person to us as we had arrested him twice before for narcotic related offenses.  Officers were able to determine that this person had used a different name each time we arrested him.  Officers were able to combine all three cases and arrested the subject for providing a false name to avoid arrest.  It was also determined that he had multiple outstanding warrants for his arrest under his true name.

On July 7th officers were dispatched to a local store on the report of a fight in progress.  Upon their arrival it was determined that five juveniles were attempting to steal merchandise from the store but were in an altercation with a group of customers who were trying to stop them.  The juveniles ultimately broke a store window to flee and were seen by responding officers running from the store.  The customers detained one juvenile and the responding officers detained two juveniles.  Two additional juveniles were able to get away.  The three juveniles were arrested for burglary, robbery, and conspiracy and released to their parents.  The case is still being investigated for the two outstanding juveniles.

On July 10th officers were dispatched to a local business on the report of a fire.  Upon their arrival, it was determined that the fire was purposefully set, and an arson investigation ensued.  Officers on scene were able to obtain witness statements and video surveillance of the crime.  Follow-up into the suspect determined that he had stolen his father’s vehicle two days prior and arrived to the local business approximately 1 hour prior to lighting the fire.  It was also determined that he caused over 1 million dollars in losess to the business.  On July 18th the suspect was arrested for an outstanding warrant and arson charges.  He was booked into jail and the report was filed with the district attorney’s office.

On July 19th officers conducted a traffic stop on a driver.  Through their investigation they discovered that the driver had a loaded firearm hidden under his seat.  The driver was arrested for possession of a firearm in a vehicle. 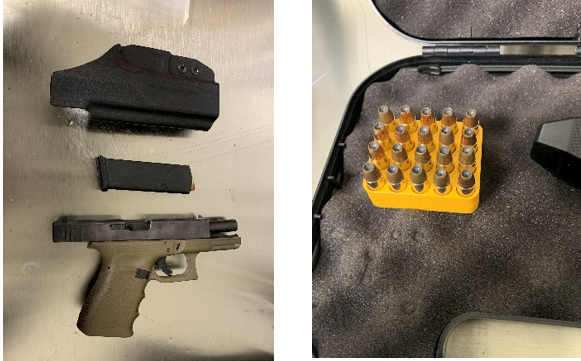