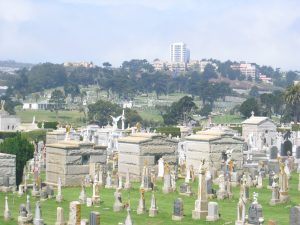 The Town of Colma, known worldwide as the "City Of Souls," is the smallest city in San Mateo County with over 1,509 residents and 1.5 million "souls." At this time there are sixteen cemeteries in Colma, including a pet cemetery. However, events that lead up to

the 1924 incorporation of the Town of Colma began seventy-five years prior during the gold rush. In 1849 the gold rush brought hundreds of thousands to San Francisco and with them they also brought disease leading to a high death rate. Twenty-six cemeteries had been established in San Francisco and most were almost filled by the 1880s.

In the late 1880s, cemetery owners started looking for new property to bury their dead as San Francisco’s cemeteries were full. The southern end of Colma was chosen because of transportation. There was easy access by horse and carriage by way of Mission Street, street cars ran from San Francisco to Colma, trains were going along side the cemeteries and most all having stops at each cemetery.

In the late 1890s California had passed the State Penal Code 297 prohibiting burials anywhere except in an established cemetery. Such as one established by a city, county, national, religious or an organization.

On March 26, 1900, the City and County of San Francisco passed an ordinance that there were to be no more burials allowed, as the land was too valuable to be wasted on the cemeteries, it was to be used for the living.

January 14, 1914, eviction notices were sent out to all cemeteries to remove their bodies and monuments. Colma then inherited hundreds of thousands of bodies. Many went into mass graves as there were no relatives to pay the $10.00 for removal.

August 5, 1924, Lawndale became an incorporated city of 2.2 square miles. The Association of Cemeteries was headed by Mattrup Jensen and Joe Cavalli, the town blacksmith was made Marshal.

For more information on all sixteen cemeteries, including the pet cemetery please go to the Cemeteries Contacts and Locations page for a list and location of all cemeteries, a list of our famous underground residents or directions to the final resting place of Wyatt Earp.  You may also view our interactive map at the bottom of the Cemeteries Contacts and Locations page for directions to a specific cemetery.