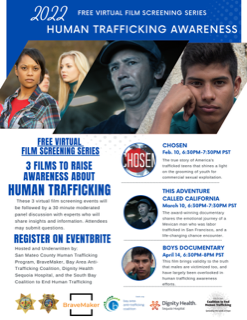 What is human trafficking?

Human trafficking is a crime which occurs when a trafficker uses force, fraud, or coercion to exploit another person for the purpose of engaging in a commercial sex act or forced labor or services. Evidence of force, fraud, or coercion need not be present if the individual engaging in commercial sex is under 18 years of age. Through control and exploitation, traffickers take advantage of the vulnerability of others to profit from their sexual exploitation or forced labor. Many people still think human trafficking is an issue that happen only in other countries, but they couldn’t be more wrong.  Human trafficking is a global, national, and regional problem. It is happening throughout the U.S. to both United States citizens and immigrants, and it happens in San Mateo County. It is a lucrative crime and is one of the fastest growing criminal industries in the world.

The FBI has identified California and the San Francisco Bay Area as an area of high prevalence for human trafficking. Although human trafficking is illegal, victims often do not recognize their victimization, do not know that help is available, or where to seek assistance. Additionally, community members may not know how to identify the red flags of trafficking or how to report suspicious circumstances.

Why is human trafficking a big problem in California and the San Francisco Bay Area?

Victims of human trafficking have been found in every region of California. While some populations are at a higher risk, any person of any age, race, gender, or nationality can be a victim of human trafficking. Victims are trafficked in a variety of industries and settings, limited only by the coercive control of the trafficker. California is a populous state and has the largest number of foster children and the largest immigrant population in the United States. The numerous diverse communities of the Bay Area make it easier to hide and move victims from place to place, making it difficult for law enforcement to locate and help potential victims. Victims of human trafficking are often “hidden in plain sight.”

For the past 4 years the San Mateo County Human Trafficking Program has surveyed local agencies to identify the scope and prevalence of human trafficking in the County. Responding is voluntary, and from the 20 responses received in early 2021, a range of 282-306 individuals were identified within San Mateo County in 2020 who had been victimized by human trafficking: an average of over 23 victims per month. These victims included minors and adults, females and males, and victims of both labor and sex trafficking. This is consistent with the 2019 survey which identified 304 victims with a nexus to San Mateo County.

Everyone can help in the fight against human trafficking

By raising your own awareness of this crime, and the awareness of others, you can help victims and our community by learning the signs of human trafficking and how to respond when you see suspicious circumstances. Where there is an increase in the number of reported human trafficking situations there is an increase in the number of victims identified and who are offered assistance. As one male survivor leader said, “if you don’t know to look for something, you’re never going to see it.”

If someone is in immediate danger, contact law enforcement at 9-1-1.

Human trafficking of a minor is child abuse, so reports should be made to the Child Protective Services hotline at 800-632-4615 or local law enforcement.

An anonymous report of suspicious circumstances can be made from anywhere in the United States to the National Human Trafficking Hotline: 1 (888) 373-7888 or via text: 233733. The National Human Trafficking Hotline supports calls 24/7, in English, Spanish and 200 more languages. Calls with a connection to San Mateo County will be routed to the San Mateo County Human Trafficking Program and then to the appropriate law enforcement agency for follow-up. Victims seeking help can also connect to Hotline staff via phone or text to inquire about available support and services in their area.

The San Mateo County Human Trafficking Program was created in 2015. The Program is housed within the San Mateo County Sheriff’s Office and is funded by Measure K funds. Currently, I serve as the Human Trafficking Program Coordinator, a part-time contractor. I came on-board in January 2018 and have been working with law enforcement and local agencies to enhance the County’s response to human trafficking.